The Taliban have said Afghan women seeking to travel long distances by road should be offered transport only if accompanied by a male relative. 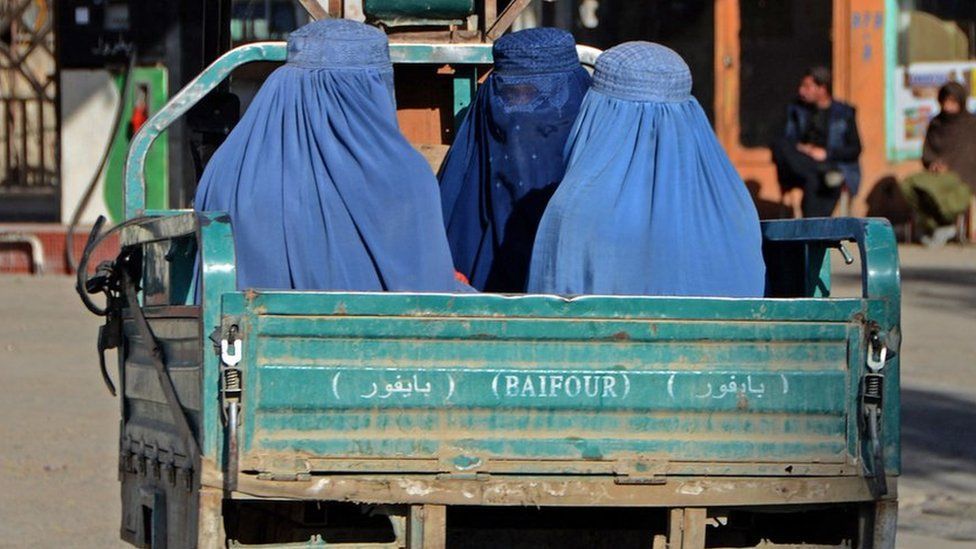 The Taliban took power in August after a swift military campaign

The directive, issued on Sunday, is the latest curb on women's rights since the Islamist group seized power in August.

A majority of secondary schools remain shut for girls, while most women have been banned from working.

Heather Barr, the group's associate director of women's rights, told AFP news agency the order "shuts off opportunities for [women] to be able to move about freely" or "to be able to flee if they are facing violence in the home".

The latest directive, issued by the Taliban's Ministry of Promotion of Virtue and Prevention of Vice, said women travelling for more than 45 miles (72km) should be accompanied by a close male family member.

The document calls on vehicle owners to refuse rides to women not wearing Islamic head or face coverings, although it does not say which type of covering to use. Most Afghan women already wear headscarves.

It also bans the playing of music in vehicles.

"I felt really bad," Fatima, a midwife who lives in Kabul, told the BBC, reacting to the directive. "I cannot go out independently. What should I do if either I or my child is sick and my husband is not available?"

She added: "The Taliban captured our happiness from us... I have lost both my independence and happiness."

Another Afghan woman told the BBC that, while the measure would help some women "feel at ease", a family escort was no guarantee against violence and harassment.

She referred to an incident in Paghman in 2015 when four women were kidnapped from their family at gunpoint and later gang-raped.

"[The Taliban] have to create an environment around the country in such a way that women feel safe," she added.

Since taking power following the departure of US and allied forces, the Taliban have told most female workers to stay at home while secondary schools are open only to boys and male teachers.

The Taliban say the restrictions are "temporary" and only in place to ensure all workplaces and learning environments are "safe" for women and girls. During their previous rule in the 1990s, women were barred from education and the workplace.

Last month, the group banned women from appearing in television dramas and ordered female journalists and presenters to wear headscarves on screen.

Donor nations have told the Taliban they must respect women's rights before financial aid is restored.

The country faces a deep humanitarian and economic crisis made worse by the removal of international support after the group seized power.