Children in care have reported being groomed and sexually assaulted in homes run by a firm making huge profits.

BBC News has found it made profits of 36% last year, double that of other big care providers - figures already considered excessive by a watchdog.

Calcot said profits were high because of built up investment, and it prioritises safeguarding children.

The company runs eight homes, four schools and supported living accommodation in southern England. It made profits of 42% in 2020 and 36% in 2021, using an industry-standard measure.

That is more than double the average annual profit made by the biggest 15 providers of children's services in Great Britain over the past five years - as highlighted in a recent report by the government's competition watchdog. The study found that profits of 17% were much higher than would be expected if the market was operating well.

The sector is in "crisis" - says the providers' group, the Independent Children's Homes Association - with increasing demand for places, severe staff shortages and ballooning costs.

But children's homes are the last resort for many young people, with the foster care system often judged as inappropriate for those who have suffered the worst abuse and neglect. And the time when homes were largely managed by local councils has long gone - more than 80% are now run by private companies.

The BBC has seen leaked company records and confidential local authority briefings. It has also spoken to a dozen current and former Calcot employees. They told us the company had accepted high-risk children, who came with increased levels of funding, but did not meet all their needs and keep them safe. Our investigation found:

*  Children had reported being groomed for sex, given alcohol, and also assaulted by staff

The Children's Commissioner for England, Dame Rachel de Souza, told us she was "appalled" by our findings and said they revealed "actual harm".

One former Calcot support worker we spoke to, Mia*, said it seemed to her that Calcot put profit before childcare and suffered from "chronic" under-staffing.

She felt it was all about "getting that high-level amount of funding for children with challenging behaviour".

A letter sent to Ofsted by another member of staff echoes that claim. The whistleblower wrote: "I don't believe they [the company] are acting in the best interest of any young people."

Mia told us one girl's needs were so acute that the local authority agreed to provide extra funding so three members of staff could continually care for her in the daytime, known as a "three-to-one".

Yet Mia says she was frequently the only staff member working with the girl. On another occasion, she said a colleague - who had also been working alone - was knocked unconscious by the teenager. Mia says the girl was later found with sharp knives in her bedroom.

But one particular incident last year caused Mia to leave the company. She says a 17-year-old girl and a 13-year-old boy were found undressed without supervision. According to Mia, the boy told other staff the girl had made him touch her genitals.

Mia says senior management assured her the incident had been reported to authorities - but Ofsted has told the BBC it wasn't. She says she then found that no record had been placed on Calcot's own incident log.

"I knew I couldn't stay in a company where the standards were so low," she says. "It was just failure after failure."

BBC News has learned of serious incidents involving other children of very high need and risk who were accepted into Calcot homes.

One teenager - a victim of sexual exploitation - was even taken from a Calcot home by a support worker and given alcohol. Tina*, who was 16, had been subject to a Deprivation of Liberty order - a court-imposed restriction on her freedom. Such measures are normally used when children are sent to secure units. The teenager was meant to have been kept inside the Calcot home for her own welfare. Shortly afterwards, she went missing for a time.

Another incident - the BBC has learned - concerns a school run by Calcot. 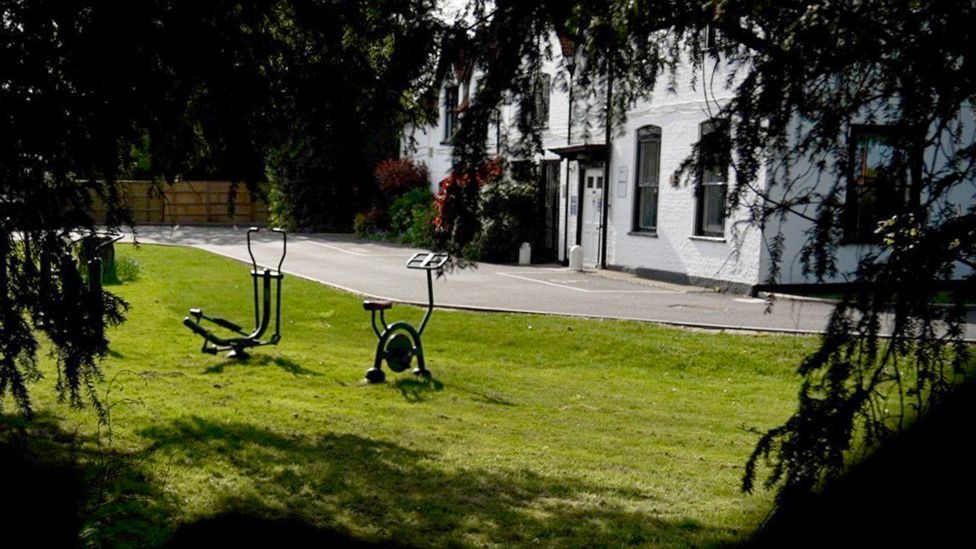 The building and grounds of a Calcot-run school

Jodie* - who has significant learning difficulties and was judged to be at significant risk of absconding - had been given a place at the school. She was also living in a Calcot children's home.

She soon fled the home with a boy - a victim of sexual abuse - and later alleged that he had raped her. After returning, Jodie continued to attend the school despite the boy living in residential quarters in the same building.

She continued to abscond and twice attempted to take her own life. Once, she reached a motorway bridge nearly half a mile away. Another time, former teacher Mohamed Abdulmohamed found her climbing over the side of a river bridge.

"I ran, grabbed her and we fell to the ground," he says. "There was a good five minutes where we sat there and she was just crying." 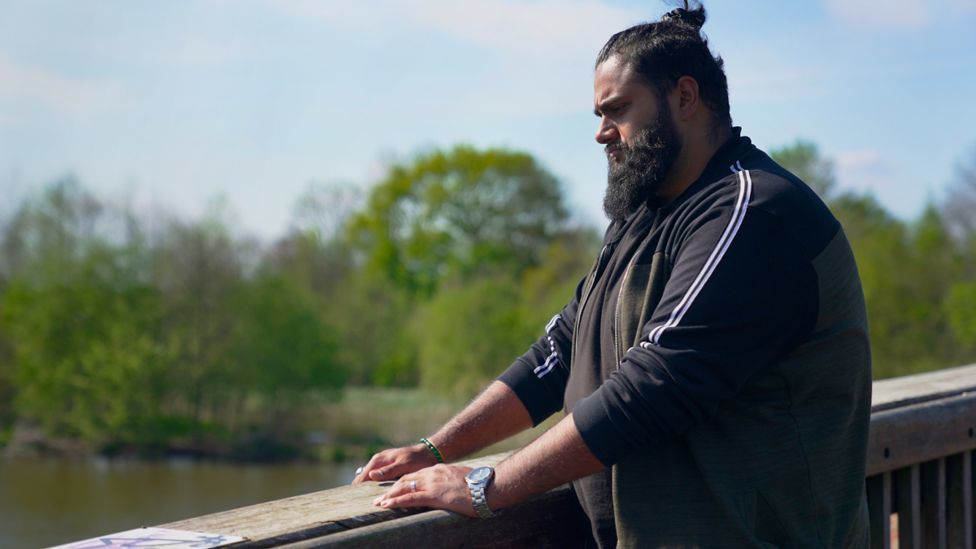 Mohamed Abdulmohamed was the behaviour lead at one school

BBC News has learned that neither of Jodie's absconding incidents was reported to Ofsted despite Calcot being obliged to do so. Three former school staff members say concerns were raised about security at the school gates, but no improvements were made at this time.

Calcot told us all incidents the company is made aware of are reported to the relevant bodies. It denied concerns had been raised about school security and said new electric gates were installed - although the BBC has established this occurred many months after Jodie's suicide attempts.

Former staff at a Calcot-run school - Eton Dorney - have also questioned what thousands of pounds of specific local authority funding for pupils were spent on. They say some children, who had each been allocated up to £23,000 for one-to-one teaching, did not receive all the extra support.

"This is money from the public purse that's meant to improve the lives of some of the most vulnerable children in society," says Maggie McCarthy, a former teacher at the school. 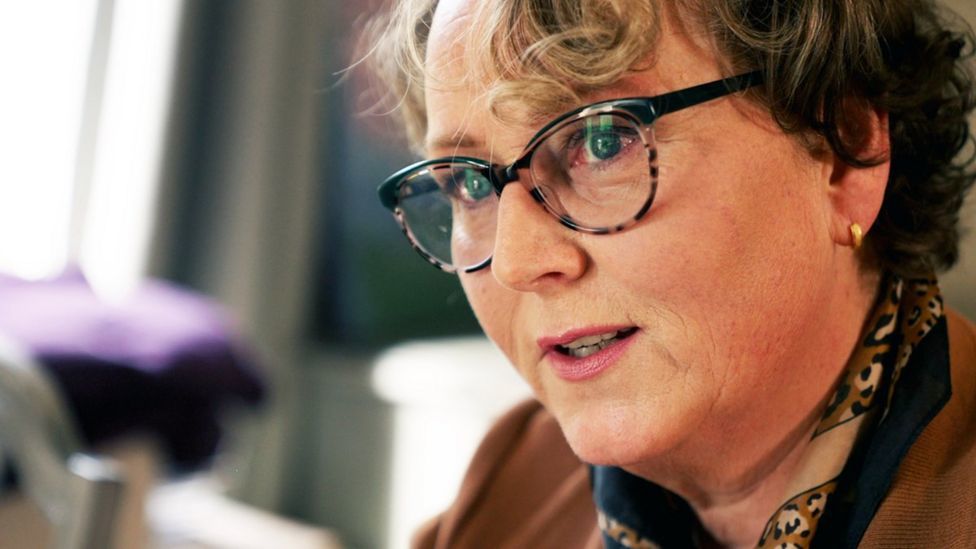 Two former members of Calcot's senior leadership team also told us that staff performing exceptionally challenging roles were both poorly qualified and paid. Our analysis of Calcot's accounts found it spent just 40% of its turnover on staffing costs. We found that the average spend by more than 30 other big providers was 58%. Calcot told us it has the required number of staff in its homes.

We have also learned that one teaching assistant at Eton Dorney was accused of assaulting autistic children on three occasions, and found to have turned up at an inset day smelling of alcohol.

Another member of Calcot's staff was recently jailed for abusing his position and sexual activity with a child. The man - a former member of office staff at the company - had been redeployed as a support worker. The 28-year-old was sent to a supported living home for older teenagers and was often required to stay overnight.

He groomed 17-year-old Michela* by sending her messages on social media calling her "beautiful" and saying he was longing for a "cuddle". Shortly after, he kissed her on the neck.

After a few months, he had unprotected sex with Michela in the living room of the home while other young people were in their bedrooms. Afterwards, he went outside to smoke cannabis. Michela headed upstairs to her room and cried.

Within a month, she reported what had happened to another staff member and he was arrested. Michela found it hard to recover, especially as she was not immediately moved out of the home.

In messages sent to a friend at the time, she described being left feeling "manipulated" and "broken". She started self-harming and attempted to take her life.

Her abuser was jailed. When asked by the BBC on the steps of the court, the former office worker said he didn't know why he had been allowed such responsibility at the Calcot home.

An allegation of rape in a Calcot home has also been made by a female support worker. She says she was attacked by a contractor while working a day shift in a property she claims was understaffed.

Despite these incidents and staff concerns, which all took place in the past three years, Calcot has maintained a proud record with Ofsted - all of its children's homes and schools are rated outstanding or good by the regulator. Many of the safeguarding issues had been reported to Ofsted, including Tina being removed from her home and given alcohol - and the rape allegation made by Jodie.

We asked Ofsted why these incidents had such little impact on Calcot's ratings. It said a number of inspections and visits to Calcot homes were currently being made.

The BBC has also learnt that two homes in Doncaster, run by a different company, maintained their good Ofsted ratings until their closure was announced - despite more than 100 reports of concern having been made since 2018 to the local council and regulator. Police are now investigating allegations of abuse at the homes operated by the Hesley Group, which says it is co-operating fully with the authorities.

The Children's Commissioner for England says she is "concerned" that there is no mechanism to immediately flag a provider over serious safeguarding incidents.

Dame Rachel de Souza said the sector as a whole included some "exceptional" private children's homes, but unfortunately "some of the worst providers" were also harboured by the industry.

She said it seemed wrong that some providers were "still allowed to make large profits".

In all, the BBC looked at the accounts of the 32 biggest private providers of children's homes and residential special schools in England. Calcot - the 20th-largest provider - told us its recent annual profits appeared high because it had been unable to spend money on investment during the pandemic.

Although the BBC has learned that in 2019, before Covid, the company made a 32% profit - using the same industry-standard EBITDA measure of profitability.

In a statement, Calcot Services for Children said:

"The sector is rightly subject to stringent regulation and the company prioritises safeguarding all children in its care. It has a history of more than 30 years caring for and educating vulnerable and challenging children.

"It is known for achieving positive outcomes and is highly regarded by Ofsted and the local authorities with which it works."

Calcot added that it was grateful to the BBC "for highlighting what it considers to be safeguarding issues".

A recent review of England's council-run children's services suggested that the government should levy a windfall tax on the 15 largest private providers.

A Department for Education spokesperson said: "We expect all children's homes to provide the right support, care and protection for children who live there - no private company should exploit those in need."

It added that it was taking steps to tackle poor-quality provision and root out bad practice.